What’s the Difference Between Ancient and Ready Mixed Concrete?

Concrete is a building material with a very long history. Apart from today’s tools, such as concrete calculators, there are many similarities between the two types of concrete. Listed below are several interesting comparisons between Roman and ready mixed concrete.

They Have the Same Composition

Concrete is made of three elements: a binder, an aggregate, and a strengthening admixture. Roman concrete uses a limited variety of ingredients. Aggregates of stone or brick, a binder of gypsum or lime, and pozzolana are commonly the favored strengthening admixtures. It was a simple recipe that amounted to widespread success.

The very opposite can be said about ready mixed concrete. Our engineering revolution has created countless types of concrete made from a wide variety of materials. Aggregates can be made from almost any stone type, gravel, or even glass. Admixtures consist of chemicals to change the physical properties of concrete, like reducing its curing time. The only consistent ingredient is its Portland cement binder.

Concrete has a curing period, which is a chemical reaction occurring between the binder and water to solidify the substance. The ancients mixed their ingredients in a mortar box and carried it on site in baskets. Ancient concrete needed to cure for two years until it reached full strength, which is why the Romans could get away with leaving it in baskets!

In comparison, ready mixed concrete cures on an average of twenty-eight days. Because of this short period, it is transported differently. After a concrete calculator determines the volume of ingredients, they’re mixed in a rotating truck to prevent the mixture from hardening (it would dry out if left in baskets). Using the concrete calculator ensures that the right amount of concrete is brought to site, so there is little excess waste. The Romans wouldn’t have needed a concrete calculator, since making enough concrete was more problematic. 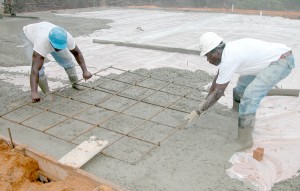 Concrete is a liquid before it cures, so it needs formwork to hold it up. The Romans used wooden formwork and placed bricks at regular intervals for better support. As a result, bricks often became a permanent part of the structure.

Ready mixed concrete is prepared in a similar fashion. Wood is also used, but not bricks because concrete is much stronger. Wooden planks are fastened together with the centre left empty for the concrete to fill. The plank dimensions are placed into a concrete calculator to determine the amount of concrete needed for the floor or wall. A concrete calculator also determines other component volumes, such as columns or footings.